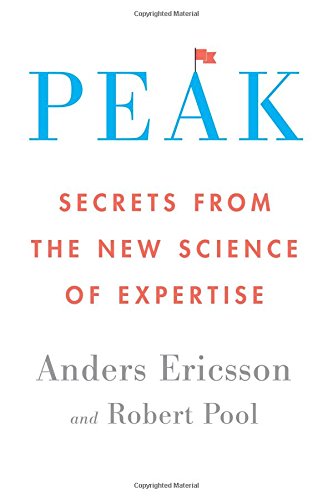 PEAK by Anders Erickson and Robert Pool, Top Ideas from the book,
Secrets from the new science of Expertise
Summary by Tylor Jones

Why are some people so amazingly good at what they do?

This week we have an extraordinary book by Anders Ericsson and Robert Pool; PEAK, Secrets from the new science of Expertise. This is more than a book, it’s like an expertise encyclopedia. This book is the results of a lifetime of studying extraordinary performers.

For over 30 years he has studied what type of practice works to make new and expanded capabilities, with a focus on those who have used practice to become among the best in the world at what they do.

It offers a new way of thinking about human potential. The reality is, we have far more power than we realize.

As Ericsson says, “The MOST EFFECTIVE and most powerful type of practice in any field work by harnessing the adaptability of the human body and brain to create, step by step, the ability to do things that were previously impossible”

Contrary to public believe, research has shown, that once a person has reached a level of “acceptable” performance, the additional years of “common” practice, don´t necessarily lead to improvement.

The doctor doing it for 5 years can be better than the one who has done it for 30 years. The fascinating reason is because “automated” activities gradually deteriorate IN THE ABSENCE OF DELIBERATE PRACTICE, in other words, in the absence of deliberate efforts to improve.

Deliberate practice is for anyone who dreams of doing something great, huge, way beyond his present capability.

There are no short cuts to success. There is no such thing as exceptional performance without an exceptional amount of time invested to improve that performance.  It takes a minimum of about 10.000 hours and usually about a decade of time to become exceptionally god at something.

Poor performance can represent death. Essentially all experts take the same path to become extraordinary and that is deliberate practice.

Here are the most important ideas I got from the book……You are not born with a fix reserve of potential; you expand your potential by using it. It expands by the various things you do through your life. Learning is not about reaching your full potential but about developing it.

-How do you take advantage of this gift and build abilities in your area of choice?

The story about Vietnam War, 1968. Americans were losing a lot of planes and pilots in air dogfights against the Soviet-Trained North Vietnamese Mig fighter pilots. The ratio for the navy pilots had dropped down to about one-to-one. The U.S Navy had shot down nine MiGs, but lost ten of its own jets.

So the Navy decided it was time to improve their training. They established the “Top Gun School”. The goal was to train their pilots to be more effective and use many elements of deliberate practice.

They picked their best pilots to be the trainers. They would play the role of the enemy in air combat. They would flight planes similar to the MiGs. The only difference is instead of missiles they placed cameras that recorded everything.

In these practices, the pilots were expected to push the limits of themselves and their planes. To flight and combat on the EDGE OF FAILURE IN ORDER TO LEARN WHAT THEY WERE CAPABLE OF DOING.

And they develop one of the most important element of the training:
AFTER-ACTION REPORTS.

During these sessions the trainers would grill the students relentlessly, asking them over and over;

–What did you notice when you were up there?

-What actions did you take?

-Why did you choose to do that?

-What were your mistakes?

-Have could you have done better?

-What could you have done differently?

And the trainers would show the video and compare that data, make adjustments to improve and get better.

Next day, the pilots would go fight the trainers, come back and do the same drill with the trainers. This was done over and over again.

Over time, the students learn to ask themselves these question in real time. Slowly they internalized these lessons. They eliminated the necessity to think.

The results of this training were DRAMATIC. U.S forces had stopped their bombings in 1969. Over the next three years, from 1970 to 1973, U.S Navy pilots shot down an average of 12.5 North Vietnamese fighter planes for every U.S Navy plane that was lost. AMAZING!

This is what deliberate practice can do for you, or your business.

This training continued and during the first seven months of the First Gulf war, U.S pilots shot down 33 enemy planes for only one lost, making it the most dominant performance in aviation history.

The story of Hungarian psychologist Laszlo Polgár, who he and his wife embarked in the 1960 in an experiment that took the next 25 years. Lászlo studied hundreds of people who were regarded as geniuses and wanted to prove that geniuses are not born but they are made.

They had three girls, Susan, Sofia and Judit, and trained them to become world chess champions. Two of them became grandmasters. And one of them became a chess legend.

They home school their daughters in order to spend as much time as possible focusing on chess. It didn’t take long for them to become exceptional.

Susan won the first tournament at 4, and she went on to be the first woman to become grand master (same path that males take)

Judit became a grand master at 15, making her at the time, the youngest grand master, male or female, ever to reach that level. She was the number one ranked chess player in the world for 25 YEARS.

It´s always about improving, becoming better. That is the idea of the book. If you don´t have a goal to get better, and you are going on automatic pilot, the natural tendency is to gradually deteriorate performance.

Purposeful practice is basically about getting out of your comfort zone, in a focused way, with a clear goal of improving something specific, and a way to monitor that improvement with positive feedback.

15-Minutes per day will help you become the absolutely best you can become.  You have a responsibility to honor pour potential. The biggest pain in life comes from not maximizing your Potential and doing what you know you were capable of doing, for you and others. You have been given the Most Extraordinary Gift; Your Life. Use it.